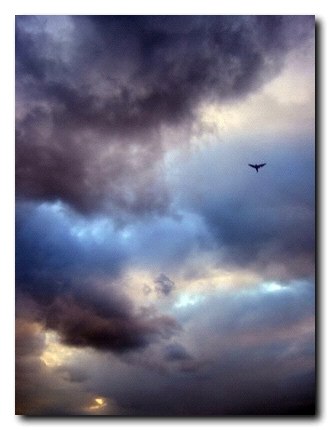 When I was young by night I'd fly
With effortless facility,
But then grew older by and by
And lost this strange ability.

Then magic arms no more would lift
For heavy years had weighed them down
And robbed them of that wondrous gift
To soar above the drowsy town.

So every night my inner eye
Explored confined and dreary caves,
Resigned, but longing yet to fly
Aloft o'er forests, hills and waves.

And then one night this grace returned
And thus my spirit found again
The gift for which I long had yearned,
Above, beyond the world of men.

It's funny. I just turned 50 -- a 50 that is closer to 60, I suppose, in terms of existential wear and tear on my psyche: I've led a mostly unsheltered life since coming of age.

It seems to me that as one ages, the internally slowing clock which, paradoxically, feels like it's rushing ever faster toward total disintegration even as its physical movement slows, dominates all else.

One finally achieves focus, and that focus can be painful.

The following comes from one of our era's most fantastic hypocrites -- Bill Clinton -- but he became such by being a very convincing moral method actor. Here he says:

<"The secret to living a full life with no regrets and to staying young is to figure out what you believe in and fight for it," Clinton said somberly, biting his lower lip in a trademark display of hard-won understanding. "If you lose, don't give up. If you win, raise the bar, and then rare back and do something else. And remember that, with the accumulation of years, our responsibilities to the future grow greater, not less.">

(I note the effective acting skills. The lower-lip biting gesture the writer evokes is classic Clinton. Sadly for the lingering reputation of his equally fantastic and hypocritical successor, George W. Bush, the veneer of sophistry and pulpit thespianisms that served Clinton so well elude 'W', who tends to come across like a very bad 1940s talent show contestant attempting to do Al Jolson's famous 'Mammy' routine.)

In whatever moments of serious introspection these men indulge or are allowed by lives lived in the public so long that their inner person is probably better known to their aides than to themselves, both Bush and Cinton have ample reason to bite their lower lips, and so do we.

We no longer possess the energy, it seems, to sustain our dreams in the face of a lifetime's consequences. Yet it is the relationship between our dreams and our accomplishments that create our sense of self-worth and satisfaction therefrom.

Even spoken by a legendary chronic liar, these words ring true:

"The secret to living a full life with no regrets and to staying young is to figure out what you believe in and fight for it..."

The fight need not and, perhaps, should not, occur 'out there' in political caucuses or endeavors of broad social import, but rather, between oneself and one's daily qaccounting with the mirror.

What most inspires you? Whatever that is, go for it, for time is short.