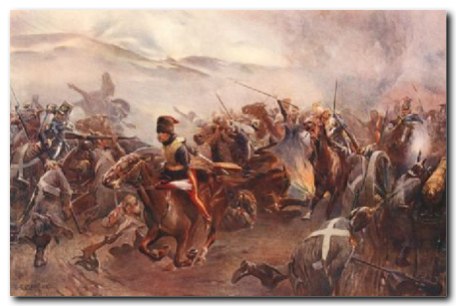 Beyond the realm of light and sound,
Beneath some weedy leaf-strewn ground,
The gallants of the bold brigade
Who charged the guns now rest in shade
While on some shelf a book decays
That sings of how the the blacks and bays
By war's confusion and mischance
Rushed headlong forward, flag and lance.
Some say the dead in glory lie
Beneath some bright admiring sky
But who can name one bold hussar
Who charged the cannons of the czar?
Huzzah, huzzah! the Light Brigade!
Huzzah! the reckless dash they made!
But like their charge, their lives meant nought:
Not ground nor immortality was bought.
Forgotten now the sparkling sight
Of sabers in the morning light;
Forgotten, too, their dying groans—
The weight of time has crushed their bones.