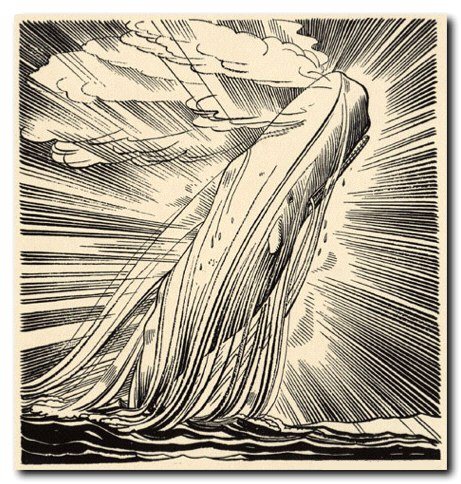 The great white whale beholds the sail
That means to work him woe,
And plumes the breeze of southern seas
Where Bedford whalers go.

The lookouts shout, the crew turns out,
The longboats pull away;
With rope and lance and half a chance
They'll kill the beast this day.

The captain's eye regards the sky:
The gulls now tell the tale–
Their raucous cries the calm belies
Where sounds the great white whale.

He rises now and at the bow
Harpoons gleam sharp and long;
Then there's the throw! and off they go–
The rope sings out its song.

The salt spray flies and stings the eyes;
In headlong buck and leap
The whaleboats dance and dip and prance
Like sprites across the deep.

Then all is still and with a thrill
The crews gasp at his rise:
Leviathan now turns on man
His black and baleful eyes.

They watch in awe his toothy maw
Gape terrible and wide;
As if in dreams the sailors' screams
The only sound provide.

He sounds again and flukes descend
To crush the men and boats
Upon the swell the splinters tell
Where one lone seaman floats.

And down below the bilge planks show
The whale has come to call:
A crash! The din! The water in!
He means to kill them all.

The ship sinks fast until at last
The masts slip out of sight,
And on the waves but one man raves
Upon his float that night.

The story's old and often told,
But mark this hoary tale–
And learn the rule: that man's a fool
Who seeks his own white whale.

The wise man learns, where hatred burns
But naught of good can come;
Obsession's cost is ever lost
When God totes up the sum.

I have always wondered by the writer used the biblical names, like Captain "Ahab". And then; the prophet too. Was there supposed to be a deeper connection of "Moby Dick" to the biblical confrontation between the prophet and the king? Someday, I hope someone will explain it to me.

Nice poem. Made me think. One man. Now there is a concept for humanity to ponder!

Anonymous, at 3:20 AM
The model, if there were one, for this piece would be The Rime of the Ancient Mariner, my favorite long poem. Coleridge used a lot of common meter - 4 iambic feet, alternating with 3 iambic feet - in addition to metric variations that break the metrical monotony in a poem as long as the Ancient Mariner (720 lines if memory serves). This stanza

The fair breeze blew, the white foam flew,
The furrow followed free ;
We were the first that ever burst
Into that silent sea.

is an example from the Rime of the usage of internal rhyme in the four foot lines 1 and 3, with end rhymes of lines 2 and 4. It has a rolling swing to it - perhaps something like the roll of a ship on the high seas.

Jeffrey Hull, at 1:22 PM
cooooooool
came across this when i googled "white whale" but the rest of your blog looks amazing too

I love your poem "The White Whale." I have used it with my English III students after we have read MOBY-DICK. I was wondering if I could get your permission to use your poem in a test I am creating. The students would read your poem and answer questions about it. Sometimes I publish these tests as well. Would you be willing for your work to appear in a published test?

Thanks for your time!