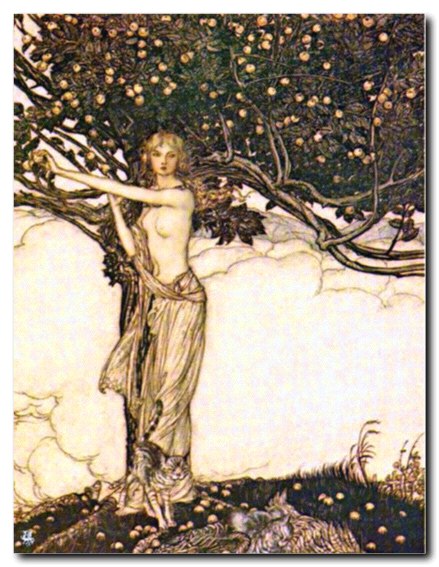 1. Guardian of Valhalla, hall of the spirits of brave slain warriors.
2. Lord of the warrior gods (Æsir). God of both wisdom and war.
3. Realm of the gods.
4. Norse goddess of love, sexuality, fertility and battle. She and the valkyries gathered up the souls of the brave slain, to be apportioned half to Freya, half to Odin. She rode into battle astride a great boar, or rode in a chariot pulled by two blue cats the size of lions.
5. The Trickster, god of mischief and fire.
6. Minor female deities in Norse mythology, who served Odin; led by Freya, their purpose was to choose the most heroic of those who had died in battle and to carry them off to Valhalla where they became spirit warriors; those alloted to Odin were destined to fight at his side at the preordained great battle at the end of the world, Ragnarök.
posted by Jeffrey Hull, 6:49 AM

It fits its verse. The leather creaks. The breastplates stink of sweat and bear tallow. The swords sing and shimmer. The fires, from numerous hearths, burn pink, blue, and gold as fires do when burnt days on end; their heat warms the people's backsides while the food and drink warns their fronts.

We (homo sapiens) have always fought. It is our curse and our glory. I believe that the path to an enlightened humanity lies in those genes which best combine the courage to love and love and love again with the genius of unrelenting lethality applied with prudence aforethought and unflinching homicide after the decision has been made.

Love and kill. This is the meanig of agriculture, which worships and nurtures the grain but reviles and destroys the weed.

(Yet without weeds the vermin have no choice but to eat the grain. The crux of the balance lies in how we define, understand, and apply the word 'and' between Love -and- Kill. To rule is not to dominate. Domination only grants a brief period wherein one can make one's mark. To rule is to intrude a greater integrity, a stouter scheme, than that which one has commandeered. Such is the final objective in Iraq. Such an objective must surmount the corruption and confusion and incohesion from which it was commenced: war is no more pure than the daily business flaunted in our TV commercials with their hurriedly mumbled boilerplate in their closing staements. Currently, our challenge in Iraq, and my chief complaint about our involvement over there, is that we've placed too much faith in broad-spectrum pesticide than in sufficient farmers to deal with and distinguish between noxious and necessary weeds. We've relied on Round-Up (T) more than hand-wielded hoes. Especially in the early phase of replanting a garden that has been scorched and tilled, it requires many hands and daily weedings, and most of all, wisened eyes, to know which fragile seedlings are the grain one wishes to nurture and have worshipped, and which are the bitter weeds one wishes to exclude and have reviled.)

At this point, this allegedly leftist liberal has heard only one presidential contender speak both honestly and wisely about Iraq: John McCain, who has consistently acknowledged that what we have taken on is a long and brutal process made worse by our unwillingess to commit sufficient troops -- and political honesty -- to the awesome labor of invading, commandeering, rebuilding and retraining of an entire polity -- one that lacks a genuine national identity (Sunnis, Kurds, Shiities do not a national identity make) -- into a harmonious state that respects itself and its neighbors.

If we weren't willing to commit the troops we had available, and then reinstate a draft to maintain armed forces sufficient to the global challenges of our day, then we should have stayed home.

But now we are there, and that is that, and we will either muster adequate resources and resolve to finish what we've started or we will reiterate what was 30 years ago called 'peace with honor' but is more accurately labeled by history as The Rise of the Khmer Rouge.

Is this a real, national war that Americans will support by offering their young persons to participate in a lottery draft by conscription, with all the involvement and political responsibility such a task requires?

Or is it just an ongoing exercise in the arrogation of military prerogative by civilian leaders who've consistently ignored the wisest counsel of their most senior and experienced military commanders?

This sounds like an oversimplification but this is my maxim: no draft, no lasting good done. While the death toll is admirably low (technology and training of the finest armed forces in the world), our men over there cannot do it alone. They need enough recruits to both send the bulk of them home and double the number of boots on the ground. I say this knowing that the Iraqi army is beginning to come up to speed. Indeed this is partly why I say so. As their competence and confidence increases, their willingness to submit to the aims of the mission on which we embarked and have thrust upon their land, may well become ambiguous, and they may even unite hostilely against us.

We are growing grain and weeds in the same furrows. We need more farmers with well-sharpened hoes, and we need to give the current farmers both relief and encouragement not with bumper stickers and rhetoric but troops to sustain them over the long haul.

On this matter, I doubt McCain will propose a draft. But he might, just might, acknowledge with sufficient fortitude the reality of the task we've taken on so that perhaps, just perhaps, we the people will accept our responsibility for the actions our leaders have taken and supply the necessary follow-through -- whether we approved or didn't the initial decision to invade Iraq. (I was a strident opposer of this decision, by the way.)

Will we walk our talk or mumble by the wayside? I wait with bated breath...