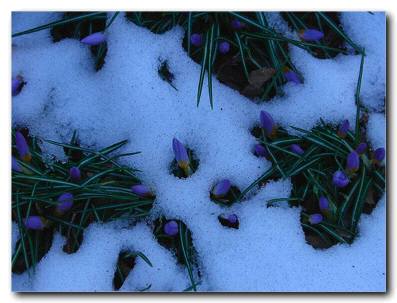 The rising of the greening shoot,
The budding of the vine,
The plucking of the heavy fruit,
The aging of the wine;

The counting of the bridal chest,
The preening of the groom;
The rip'ning of a mother's breast,
The swelling of the womb;

The gasping of the primal breath,
The wailing infant's cry;
The suckling babe denying death
And cooing at the sky.

Perhaps my fave of yours.

Essentially, it is a Whitmanesque catalog given structure via meter, rhyme, and temporally logical succession, which give it a semantic hierarchy that cleanly delivers the fearless frisson of the final two lines.

"The gasping of the primal breath,
The wailing infant's cry;
The suckling babe denying death
And cooing at the sky."

I partucularly like how, after first being hocused through the trick word 'suckling' and then pocused through through the declaration of two words -- denying death, the gasping and wailing of primally breathed infant's cry becomes a coo at the sky.

Your readers are themselves turned upside down and given a teat's eye view of the wonder of it all.

Richard Lawrence Cohen, at 6:14 PM
Thank you both. It took some time to finish, mostly just staring at it, but writing a number of discardable stanzas to reach the distilled essence. Gerunds on parade. By that time, I had no idea if anyone would like it, in fact, doubted that anyone would. It surprised me.