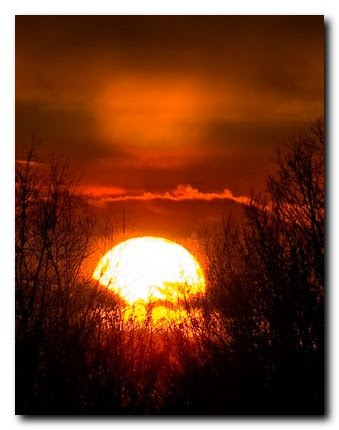 If the radiance of a thousand suns
Were to burst at once into the sky
That would be like the splendor of the Mighty one ...
I am become Death,
The shatterer of Worlds. - Bhagavad-Gita


The sunset's king recesses down the sky
To kiss the land and bid goodnight the day,
But does not dwell upon the by and by:
His glance will someday boil the seas away.

What blessings that his light on earth bestows
Are bought and paid with incandescent time
As star-stuff burns–and when the big one blows
A fierce deep-throated closing bell will chime.

From long before the ancient dawn of man
Where frigid eons kept the heavens' keys,
Apocalypse on God's installment plan:
The end of days glows just beyond those trees.

By no means your best but... the final line is worth the price of admission. Yes. (Oz, typing from work, hence the anonymous handle.)